Hitting, sure, that was an issue. He was bad at that for most of his seven seasons in a Cubs uniform. It’s OK to acknowledge it, to write it, to tweet it. It’s the truth, evidenced in all of the numbers and the eye test.

But Heyward sure could connect. With fans, with teammates, with a city.

Thanks to that famous World Series meeting during the rain delay, Heyward cemented a place in Cubs lore, even after a nightmare debut season, the first in a disastrous long-term, $184 million deal. At the time, Heyward was in the midst of batting .100 with 1 RBI through three postseason series. It’s hard to lead when you’re 5-for-50, almost impossible if we’re being honest, but being present for his teammates was Heyward’s true gift, one that FanGraphs or Baseball-Reference couldn’t quantify.

On Monday, amid a brutal rebuilding season, Cubs president Jed Hoyer broke the news that Heyward was not coming back for the final season of his contract in 2023. Writing off the sunk cost of Heyward’s last year (at $22 million) was not a surprise , but no one really expected the news to come in the beginning of August. Heyward hasn’t played since June 24 because of a knee injury and he’s unlikely to get a final at-bat in a Cubs uniform. 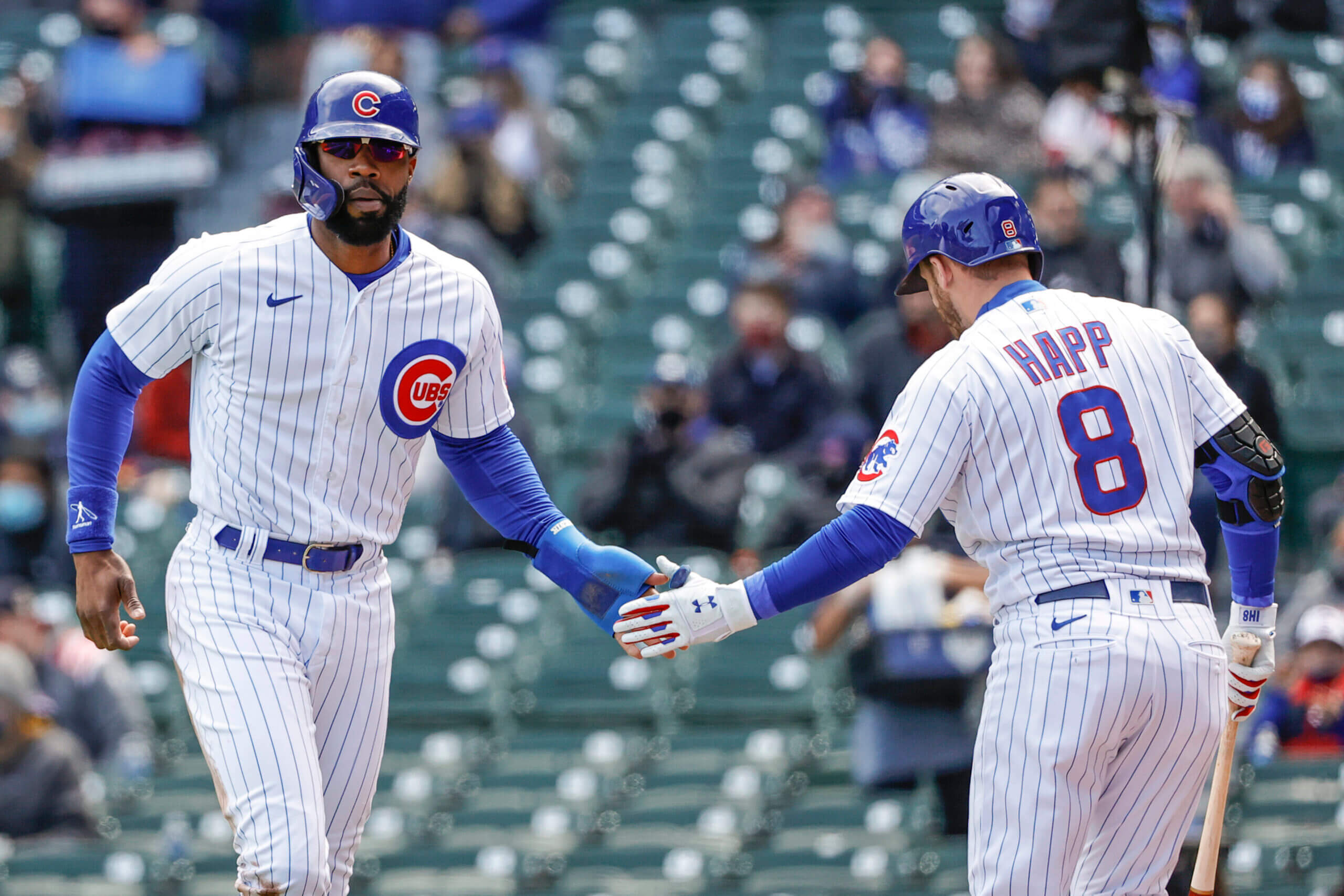 Twitter is designed to be an echo chamber and a hive of viral negativity, but the early reviews on Heyward’s star-crossed Cubs career were mostly positive, almost defensive from fans and media (and media fans) because of Heyward’s personality. While plenty of people rightfully raged about the lack of production over his time here, you’d have to be a real jerk not to have been charmed by him as well.

In that 2016 season, I was struck by Heyward’s availability. He was always around, willing to talk about the team, himself, and everything in between. When the Cubs announced his signing at a press conference at the chic Michigan Ave. restaurant Spiaggia, then-Cubs president Theo Epstein warned us that Heyward wouldn’t be a great quote but predicted he would be a fantastic teammate. Theo won 1-for-2. Heyward wasn’t running towards the red light of the cameras, but he was a thoughtful ballplayer. He listened to questions, gave long answers, and wasn’t afraid to push back on narratives. He never made excuses for his own failings as a hitter. It’s not wrong to say that kind of attitude goes a long way with journalists. We know what we saw on the field and we know what kind of guy Heyward was off of it.

Heyward was consistent on and off the field. The problem for the Cubs was he paid handsomely and expected to contribute at the plate. But in 2016, he hit .230 with an OPS of .631. He wasn’t brought in for his power, but even the most modest predictive models had him hitting more than seven home runs. Heyward looked completely broken at the plate that year. Playing in a market like Chicago, for a team expected to end sports’ most famous championship drought, could drown a lesser man. But the Cubs thrived without his offense and Cubs fans, even the nastiest ones, mostly let him be.

Heyward didn’t force the Cubs to give him $184 million. The contract is Epstein’s fault. It was an epically bad judgment and the worst deal in Chicago sports history. It’s neither Epstein’s nor Heyward’s fault that Tom Ricketts didn’t spend like a Steinbrenner in the years afterwards. But Heyward’s mixture of big money and little production was a reason — though not the reason — why the 2016 Cubs wound up being like the ’85 Bears — one-hit wonders.

To his credit, Heyward’s numbers improved incrementally in the years after 2016. He finally got to league-average production in 2019 thanks to a power surge that saw him hit 21 homers. Of course, that was the year the Cubs missed the playoffs. Heyward was also one of a few Cubs to actually hit in the pandemic-shortened 2020 season, putting up an .848 OPS (in 50 games), his best since his rookie year in 2010.

But he came tumbling back to reality in 2021 with a career-worst .627 OPS in 104 games. This year, he was even less productive with a .556 OPS in 48 games. His slugging percentage (.277) was lower than his on-base percentage (.278). Even with the string of Four-A hitters in the lineup, Heyward shouldn’t have been out there. It’s a good thing we don’t have to see him in a Cubs uniform anymore.

Heyward’s life is not defined by his job. He’s funding a baseball academy in Austin. He has a wife and a son. He’s a role model for Black ballplayers. He’s a role model for everyone. While Heyward still wants to play, it would make sense for the Cubs to hire him to work in their front office when that itch is scratched. For the rest of his life, wherever he goes, I’m guessing he will have a positive impact.

While the severity of Heyward’s offensive struggles was unexpected, it’s important to remember he wasn’t trumpeted as a $184 million slugger when the Cubs signed him. Back in 2015, Heyward was marketed as an all-around baseball player, a sabermetrics darling for his skills on defense, baserunning and contact percentage. (No one knew at the time Heyward would become famous for groundballs to second base.)

At Heyward’s introductory press conference in late 2015, when hopes were high, Hoyer, in a conversation with me, compared him to Kawhi Leonard for his defensive prowess and all-around talents.

“I think when you look at the way you evaluate his total contribution to the game, I think he’s an exceptional player,” Hoyer said. “People have talked a lot about the standard way people get compensated and paid in the game and how that’s changing. I do think more and more teams, and baseball fans, are looking at the totality of the player’s contribution to the game as opposed to simply the offensive contribution. We had generation after generation that was entirely focused on one part of the game and now, more and more, I think it’s better for the sport. There is a lot to the run-prevention side of the game too.”

Almost seven years later, this is how Hoyer wrapped up Heyward’s Cubs run.

“Great teammate,” he said. “He’s a great defender. Someone who, even when he was struggling, tried his absolute hardest every day, every offseason. That’s kind of what I’ll remember. He certainly had his good moments here, but he had a lot of struggles as well. When he had those struggles, he never blamed anyone. He never stopped working. He was always a guy who showed up in the best shape coming into every season. He was always a guy who was in the cages trying to get better. That’s probably how I’ll remember him.”

That’s not how you remember a $184 million player, but what else could Hoyer say after all these years?

Hoyer added that Heyward was “in a lot of ways an emotional leader of a group of players that broke the curse here and provided fans memories for a lifetime. He should be remembered that way as well.”

No one can forget the meeting. None of us were there. But we all heard about it. It became part of the lore. The Cubs didn’t just win the World Series, they won it in poetic fashion, losing a lead late and rallying around each other during a rain delay.

“That just came to me that we should get together and talk real quick,” Heyward said in the booze-soaked clubhouse after Game 7. “That was the perfect moment for us, the perfect storm, so to speak.”

Heyward said his message that night was simple: “We’re awesome. Don’t get down.”

“He said let’s forget about everything that happened up to this point,” Ben Zobrist recounted that night. “Let’s believe we’re going to do this. That’s all that needed to be said.”

Heyward wasn’t the only person to speak. And it was guys like Kyle Schwarber and Zobrist who came out after the delay and won the Cubs their rings. But in a season that began with trying to calculate Heyward’s value and nearly ended with a negative answer, there was no sense fighting this narrative. Everyone has their role and Heyward’s was as a teammate.

That’s why, for as long as Heyward walks into Wrigley Field and around Chicago, he won’t be met with recitations of his wRC+ or the number of zeroes in his contract. He’ll be remembered with smiles, back slaps and picture requests.

Everyone loves a winner, no matter what their batting average was.