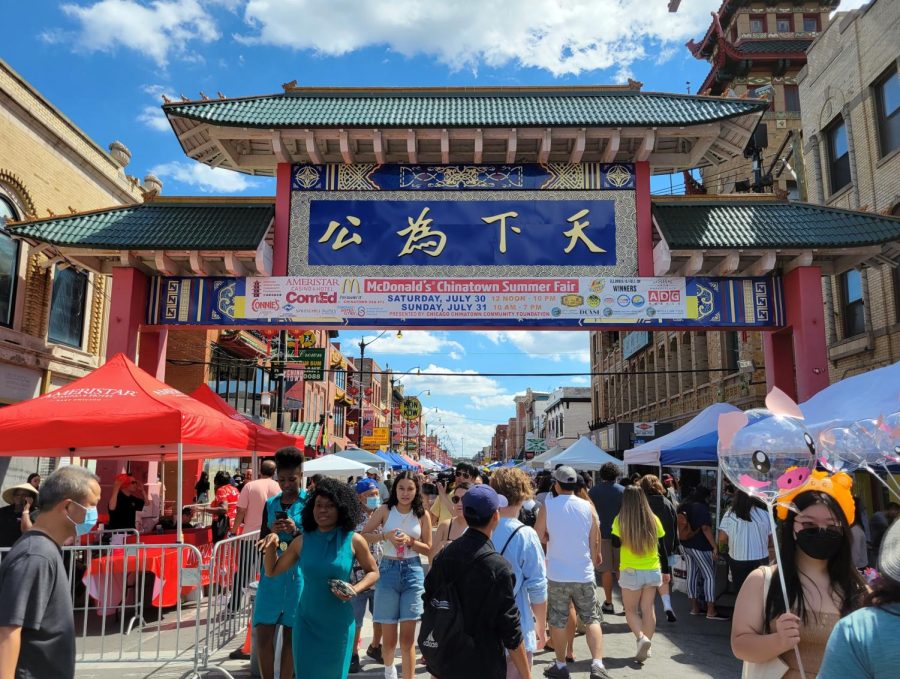 “It’s really encouraging having the fair because there’s a lot of people coming from different places in Chinatown and the suburbs,” Weinberg sophomore and Chinatown resident Naomi Wu said. “They’re all vibing and having fun in Chinatown, which is really exciting.”

The neighborhood street festival attracts more than 40,000 people from throughout the Midwest. This year, fairgoers shopped from street vendors, watched performances, participated in arts and crafts and enjoyed a fish ball eating contest.

According to the website of the Chicago Chinatown Community Foundation which presented the festival, “this iconic event is one of the most ethnically unique outdoor events in Chicago and the Midwest.”

Community members created the Summer Fair, originally called “Taste of Chinatown,” in 1979 to increase the neighborhood’s reach in Chicago and provide its organizations a chance to work together.

Caedon Hsieh (McCormick ’22) spent his time at the fair playing 9-man volleyball, which got its start on the streets of Chinatowns across the US

His team set up the court on the street right by the fair entrance and played all day, he said. This festival was the first time the sport had been played on Chinatown’s streets in 56 years, according to Block Club Chicago.

“It goes back to the original roots of how 9-man volleyball started,” Hsieh said. “It was originally played on the streets and was played in Chinatown by Chinese immigrants who weren’t able to play elsewhere. It’s a pretty big cultural thing.”

At the fair, Wu spent her time watching 9-man volleyball as well as the Asian Pacific Islander Teen Alliance of Chicago performances, which featured a Chinese fan act, martial arts and dances like K-pop and J-pop. While walking along the streets, she also encountered people she knew from Northwestern, church and high school.

Being able to reconnect with so many people from different parts of her life is what makes the Summer Fair one of Wu’s favorite Chinatown events, she said.

“There was one person who (I) grew up… with,” Wu said. “I hadn’t seen him in 10 years, and he just was randomly walking down the street.”

Growing up in Chinatown is what made the fair so much more personal, Wu said. She lives on the same street as a grocery store, a restaurant and a hotel, all of which were right next to the fair.

Living in the “dead center” of the community has allowed Wu to experience Chinatown in a different manner than tourists do, she said.

“Being able to see people in Chinatown, like when I’m walking to school or walking to the train station, gives me a chance to be connected to the community in a way I feel I don’t get in Evanston,” Wu said . “I think that has helped me care more about the community.”

Although Hsieh is from the Chicago suburbs, he sees similar elements of the Chinatown community in his volleyball team.

The tight-knit unity is one of them, Hsieh said, which he could observe even when visiting the fair for the first time.

“One thing we really emphasize with our team is the idea of ​​family,” Hsieh said. “That’s the culture I think we tried to grow within our team and is also true of the greater Chinatown Chicago Chinese community.”